How Long Does LSD Stay In Your System?

Lysergic acid diethylamide or LSD, also sometimes known as acid, is a synthetic chemical considered an illegal hallucinogenic drug. It has a long-lasting effect on the user’s perceptions and can be detected on drug tests. Hence, LSD is classified as a Schedule I drug, indicating that this acid is not currently accepted for medical use. Read ahead to learn about LSD abuse and addiction and how long does LSD stay in your system?

What Is LSD And Why Is LSD Abused?

Lysergic acid diethylamide or LSD is purely a recreational drug with no pharmaceutical applications. However, it is a part of the pharmacological group called psychedelics and is one of the most potent chemicals famous for altering the psychological state of its users. This odorless and colorless drug comes in the form of drops or tablets.

People commonly use LSD to feel the ‘out-of-the-body’ experience because when LSD is introduced into the system, it causes hallucinations and sensations that are not real. As LSD influences the receptors that are mainly involved in regulating serotonin (a neurotransmitter that controls mood and sensory perceptions), it gives users a false sense of being out-of-the-body. Therefore, LSD is not considered addictive per se, but the effects caused by LSD make the user abuse it repeatedly.

How Long Does LSD Stay in Your System

LSD or acid can be tougher to detect than other drugs because it is quickly broken down in the liver. The half-life of LSD is only 3 to 4 hours and is readily absorbed through the gastrointestinal tract and mucosal membranes after being taken orally. After being consumed, LSD reaches the bloodstream and organs, taking roughly 10 to 15 minutes as LSD or acid is mostly digested by the liver. The liver then converts it to a variety of inactive metabolites. Almost all of the medication is metabolized and eliminated within 24 hours. Let’s take a look at how long LSD stays in your system. 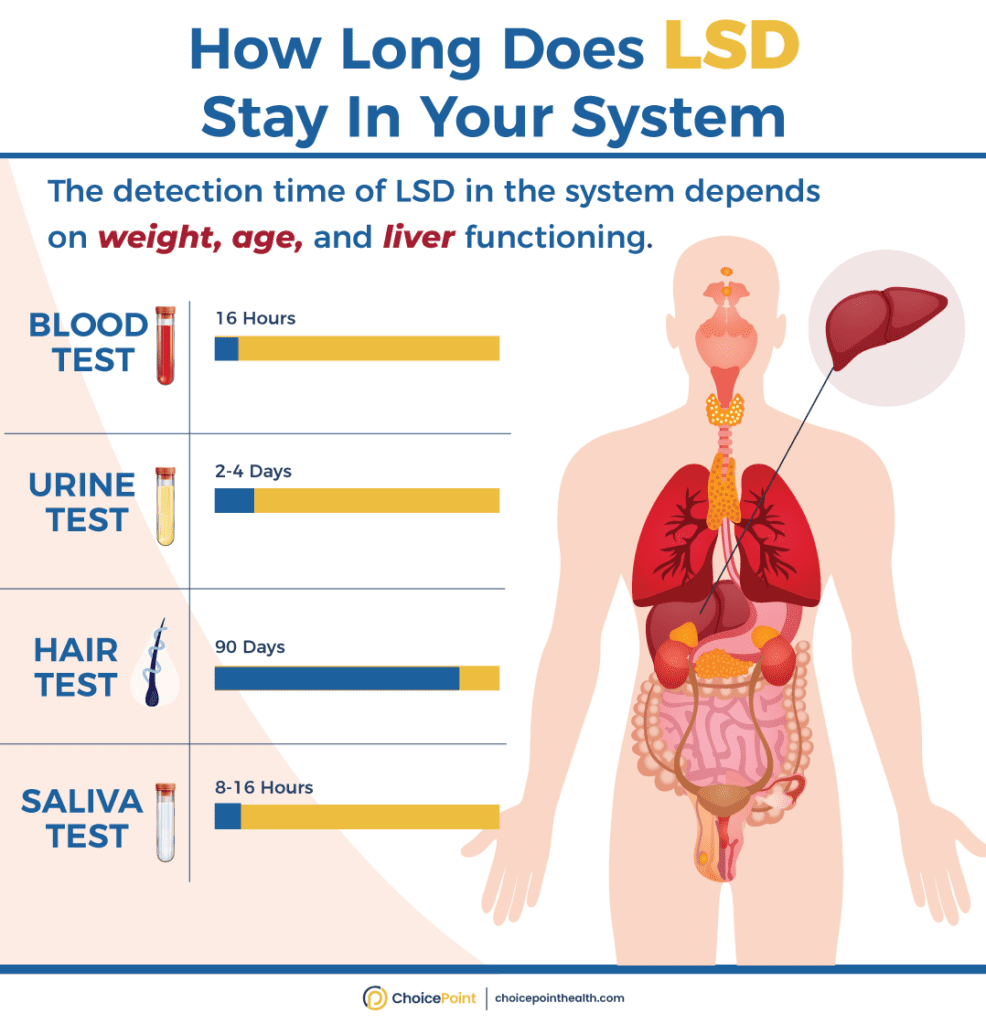 How Long Does LSD Take to Kick in?

Time LSD Takes to Kick in

How Long Does LSD Stay in the Urine?

LSD can be detected up to 2 to 4 days after the first dosage.

How Long Does LSD Stay in Your Saliva?

Swab tests that use saliva can detect LSD up to 8 to 16 hours after the first dose.

How Long Does LSD Stay in the Hair?

Traces of LSD can be found for up to 90 days after use.

How Long Does LSD Stay in the Blood?

LSD stays in the blood for about 16 hours after the first dose.

In the current economic state, where gas prices are increasing every day, we understand that it becomes difficult to travel to on-site clinics for a simple drug test. This is why ChoicePoint lets people struggling with substance abuse perform an at-home drug test, which means drug testing can be done virtually. Therefore, taking an LSD drug test is easier than you think; all you have to do is:

A study showed that 9.7 % of the population in the U.S. above the age of 12 used LSD at some point at least once in their lifetime. Well, LSD is technically not regarded as an addictive drug. However, LSD may cause tolerance and euphoria. As a result, this may lead some users to take it frequently in large dosages to attain the same results. Given the uncertainty of the medicine and amount, this is extremely risky and can result in severe addiction.

As discussed earlier, LSD may not be an addictive drug, but its usage can cause psychological dependence. Therefore, abusing LSD has certain effects on its abuser. Consequently, it is very easy to overdose while using LSD as frequent users may want the continued pleasure that LSD provides. If a person overdoses while using LSD or acid, the abuser may experience:

LSD overdose is known as a bad trip. The user is completely detached from reality, and anything can happen if urgent care is not provided. Looking for safe and effective rehabilitation in New Jersey? Contact ChoicePoint and start addiction treatment today! 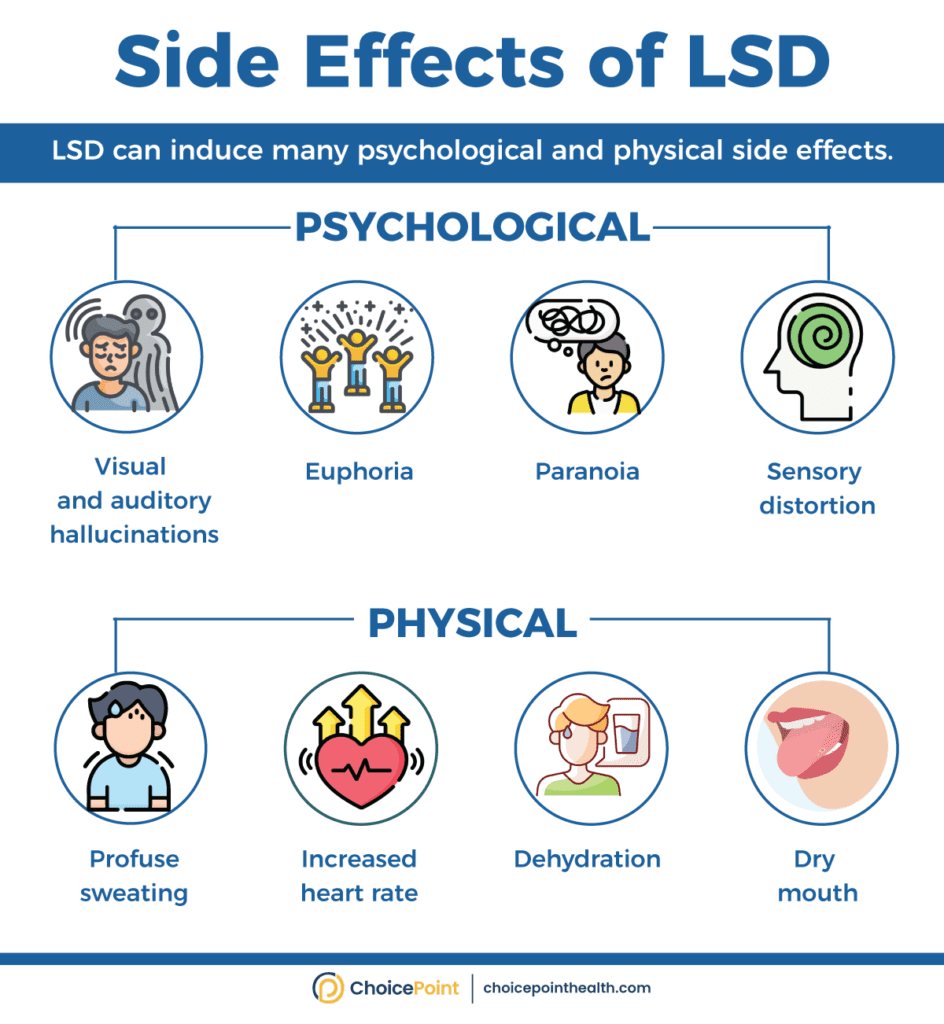 What Are the Risks of LSD?

ChoicePoint: An Addiction Rehab That Can Help With LSD Abuse

There is a common misconception that LSD is not addictive and doesn’t require proper treatment. On the contrary, LSD or acid has such a significant influence on cognitive function that it can either cause or trigger serious mental disorders. At ChoicePoint, the addiction treatment for LSD focuses on understanding and treating not just the use of the drug itself but also the underlying issues that led to its use and abuse. Here are addiction treatment programs that can help treat LSD addiction.

Even though LSD mostly has psychological side effects, dealing with the physical withdrawal symptoms of LSD can be hard. The best option is turning to a medical detox program where a team of experienced professionals can help you successfully detox from LSD. In addition to that, they will provide supervision, and that too in a safe and comfortable setting.

With Outpatient rehab, an individual does not need to be present on-site 24/7 to receive addiction treatment. They can visit the doctor on scheduled days and carry on with their daily routine.

To treat the side effects of LSD addiction, our doctors at ChoicePoint can provide:

All aspects of the Outpatient treatment program can also be completed virtually through ChoicePoint’s telehealth services. Call us at 844.445.2563 to learn more. 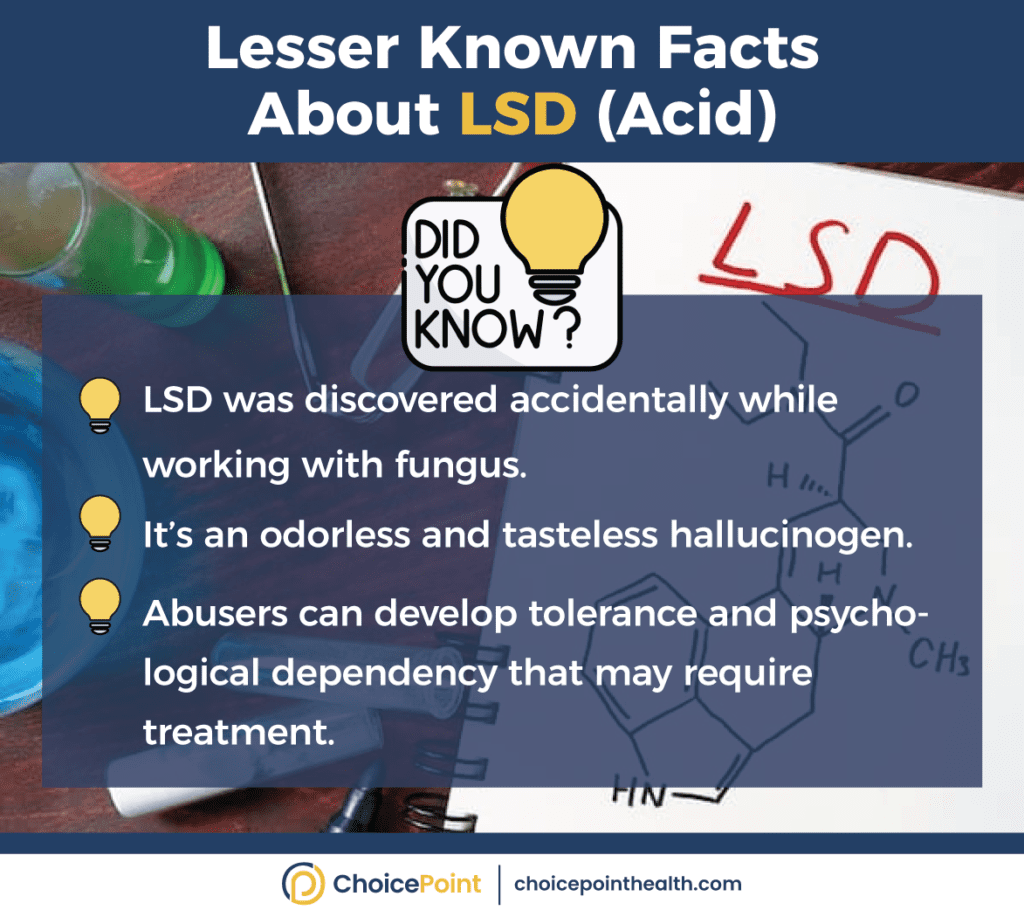 The connection between addiction and developing mental health disorders is profound. As LSD is purely a recreational drug used to alter mental perceptions, its effects on the mind can form some type of mental illness. Therefore, it is important to treat LSD addiction using a dual diagnosis treatment program. At ChoicePoint, during the dual-diagnosis treatment, our specialized doctors may:

Do you feel like you have started abusing LSD and can’t manage on your own? Seek help today as it can badly deteriorate your mental health. All you have to do is simply contact 844.445.2563 and make an appointment with ChoicePoint DEA-certified doctors who will take care of you as we are specialized in co-occurring disorders treatment in New Jersey.

We Accept All Insurance Programs

Get Help – How Long Does Lsd Stay in Your System?

Not all LSD abusers report having pleasant experiences. As it alters one’s perceptions of time, feeling, and awareness. Also, with frequent LSD abuse, one can develop a tolerance for LSD which can be detrimental to physical and mental health. Therefore, as long as LSD stays in your system, an individual is prone to relapse. This concludes if you or someone you love is apprehensive about their LSD intake, then they must take at home drug test and seek help from addiction professionals to assist them in quitting their LSD use. The best treatment for LSD abuse is medically assisted therapy sessions that can help them to understand their addictions and learn ways to cope with them.

ChoicePoint aims to improve the quality of life for people struggling with substance use disorder and mental health issues. Our team of licensed medical professionals research, edit and review the content before publishing. However, this information is not intended to be a substitute for professional medical advice, diagnosis, or treatment. For medical advice please consult your physicians or ChoicePoint's qualified staff.

A Journey to Sobriety and Recovery!

Ultimate Guide for ER Doctors: How to Get Someone Admitted to Rehab
August 3, 2022

Opioid Treatment Programs Near You – A Quick Guide
July 21, 2022

Follow These Brave Veterans Who Have Battled With PTSD
June 28, 2022

Top Mom Influencers Share 3 Tips On How To Help a Recovering Mother
June 21, 2022

How to Heal Your Liver After Alcohol Abuse
June 9, 2022

This site uses Akismet to reduce spam. Learn how your comment data is processed.

When you call us, a patient-friendly admission navigator will discuss your options for treatment.
1. No obligation to enter treatment
2. No cost
3. Available to you 24/7