How Long Does Buprenorphine Stay in Your System 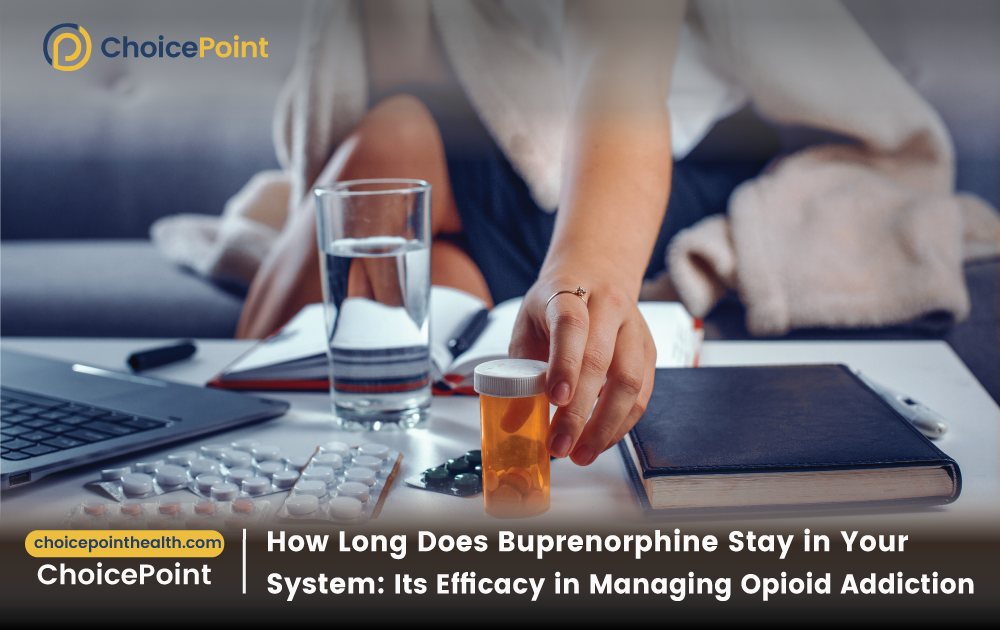 It is estimated that around 90 Americans become victims of an opioid overdose every day. According to the latest figures, there were an estimated 75,673 opioid overdose fatalities in the 12 months ending in April 2021. Even though these numbers are alarming, there are efficacious medications, such as Buprenorphine, that can minimize the risk of opioid overdose. Because it is an opioid, it is natural to wonder, “How long does Buprenorphine stay in your system?” In this article, we answer your question and also explore the effectiveness of Buprenorphine in managing opioid addiction.

What Is Buprenorphine Used for?

Buprenorphine, a partial opioid agonist, is prescribed to individuals with opioid use disorder (OUD) under medication-assisted treatment (MAT) programs. The FDA approved this medication in 2002, and is now widely implemented for opioid dependency and pain management.

How Long Does Buprenorphine Stay in Your System?

What Is Buprenorphine Half-life?

The average half-life of Buprenorphine is reported to be around 38 to 70 hours, depending on how it has been administered.

If you are here to know “how long does Buprenorphine stay in your system?”, you should also explore the liver’s metabolism. Other than half-life, the health of your liver also plays a crucial role. You are far more likely to metabolize the drug within the average range if you have a healthy liver. If you have liver disease, the half-life of buprenorphine increases, making the drug stay in the body for a longer time.

The following are some of the other factors on which the retention of Buprenorphine depends:

Buprenorphine for Opioid Use Disorder (OUD)

Opioids, such as heroin or Fentanyl®, will combine with the receptors and produce euphoric feelings. Though Buprenorphine also attaches itself to the receptors, contrariwise, it does not have the same effects as the other opioids. Being a long-acting opioid, it merely tricks the brain into feeling satisfied without triggering euphoria or affecting the body negatively. Buprenorphine can be administered in the following ways:

Does Buprenorphine Test Positive for Opiates?

On most tests, Buprenorphine will not show up as an opioid. However, some traces of the drug may be found. If you have taken Buprenorphine and undergone a drug test, it can potentially appear within the first 7 to 10 days of the last dose. It is best to inform the laboratory that you have been taking Buprenorphine.

Buprenorphine is a controlled substance that can stay in your system for some time. Though Buprenorphine is an opioid, it is not likely to show up in a urine test. However, the possibility cannot be wholly ruled out, in which case the law protects you if it is detected in a drug test.

This is a urine screening test that does not require any tool and detects the presence of BUP (Buprenorphine) instantly. It comes in the form of a strip and has the potential to rapidly absorb the drug. If a person has taken Buprenorphine in a dose of more than 10ng/ml, it can be detected through this rapid urine test.

We Accept All Insurance Programs

Managing Opioid Use Disorder with Buprenorphine

Buprenorphine is a very effective drug with minimal side effects for patients with OUD compared to its alternative, Methadone®. Buprenorphine is prescribed under medication-assisted treatment (MAT) programs that include behavioral interventions. Medical detoxification may also be implemented before Buprenorphine® is given.

Once OUD decreases in severity, Buprenorphine’s dosage may be adjusted accordingly. Unlike Methadone®, because Buprenorphine is a long-acting agent, it is not addictive. Due to this, people can potentially get off of opioids without getting addicted to Buprenorphine for reducing opioid withdrawal symptoms.

Though Buprenorphine is mostly mentioned as a treatment for OUD, it is also effective in treating pain. It is prescribed in cases of extreme pain, such as pain that results from cancer or a serious injury. In such a case, your physician may prescribe Buprenorphine to you. For pain, it is administered in three forms:

It is only prescription medication, so you need a Doctor’s prescription before you use it. If you or someone you care about struggles with OUD, contact us at 844.445.2563 or fill out this form to get professional help.

ChoicePoint is a rehab center program that offers a diverse range of plans to address alcohol and substance dependence. Almost all of them are deemed safe by the FDA. Our MAT program is one of the most effective treatments, especially for opioid use disorder. Our DEA-certified doctors may implement the following medications: 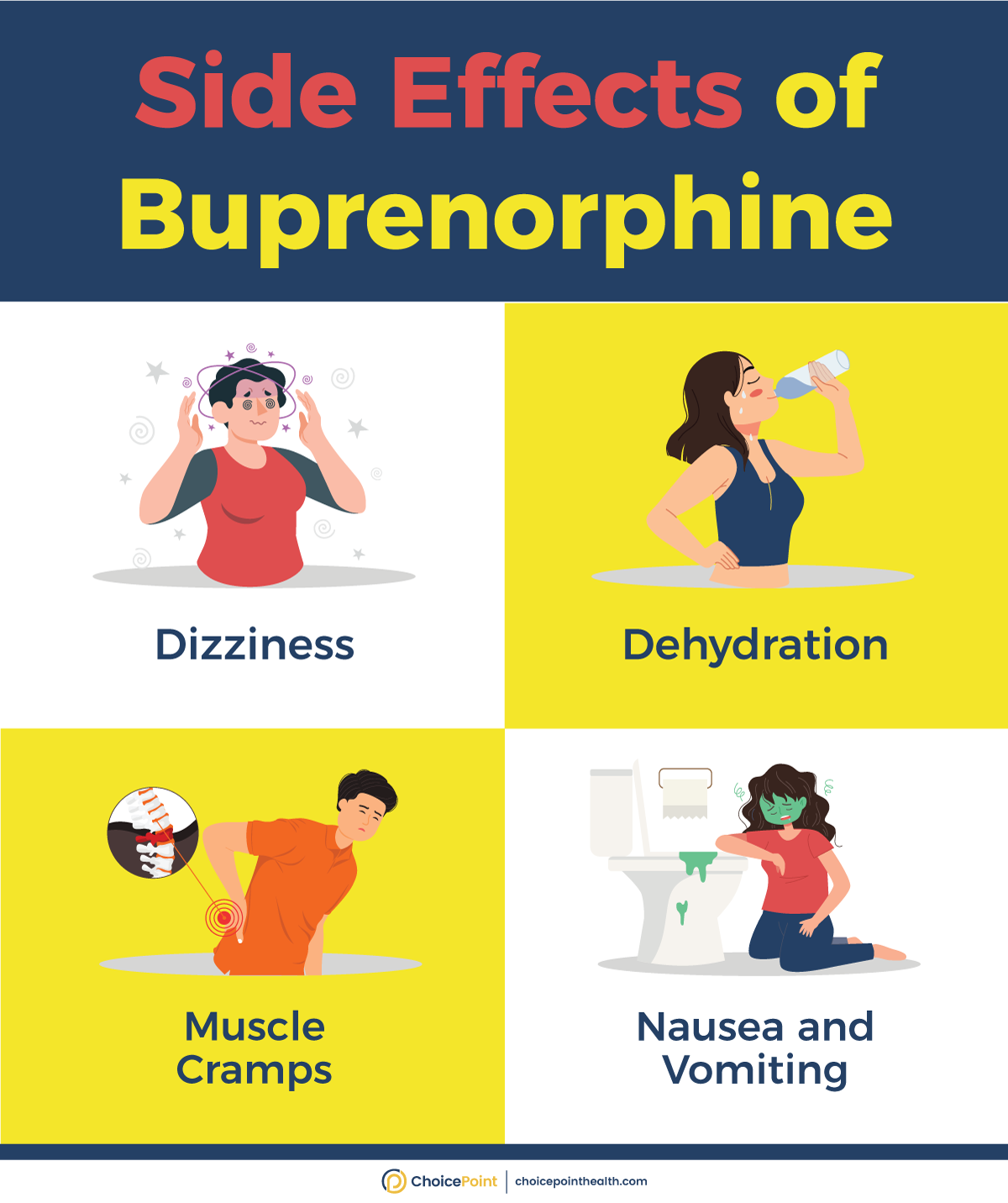 Common Side Effects of Buprenorphine

The FDA has already given the green light to implement the abovementioned medications. Suboxone® or Buprenorphine are the two most effective medications compared to Methadone®.

One of our patients, whose name will not be mentioned, says, “I wanted to forsake my addiction to heroin so bad, but despite my desire, I’d end up in the same miserable situation. This was when I realized I needed professional help because things had gone out of my hands. I came across ChoicePoint. It was like God’s call. I instantly signed up and was prescribed MAT. Today I am 6 months sober and back with my family in good health. I would urge everyone to take professional help.“

To accentuate our MAT program and ensure a lifelong recovery, we also offer behavioral counseling. The following are some of the psychotherapies that ChoicePoint offers:

With the help of these therapies, addiction can be addressed comprehensively because, essentially, these interventions allow the therapists to get to the fundamental cause.

The Conclusion To “How Long Does Buprenorphine Stay In Your System?”

Opioid use disorder is an epidemic that is affecting millions of Americans. To fight off this curse, seeking professional help is the first step. The bottom line remains the same: Buprenorphine is a worthwhile treatment option for those with a history of opioid use. While treatment with Buprenorphine still carries some risk, it has a long track record of safely assisting patients on the path to recovery.

ChoicePoint aims to improve the quality of life for people struggling with substance use disorder and mental health issues. Our team of licensed medical professionals research, edit and review the content before publishing. However, this information is not intended to be a substitute for professional medical advice, diagnosis, or treatment. For medical advice please consult your physicians or ChoicePoint's qualified staff.

Is Heroin an Opioid? Here’s Why It Is Worse Than Other Addictive Drugs
February 1, 2023

Is Suboxone the Antidote for Methadone Withdrawal Treatment?
January 17, 2023

Vivitrol for Alcohol Use Disorder: Uses, Dosage, and Side Effects
December 16, 2022

Is Tramadol an Opioid? Uses and Side Effects
December 13, 2022

How to Safely Deal with Suboxone Withdrawal Symptoms?
December 1, 2022

This site uses Akismet to reduce spam. Learn how your comment data is processed.

When you call us, a patient-friendly admission navigator will discuss your options for treatment.
1. No obligation to enter treatment
2. No cost
3. Available to you 24/7